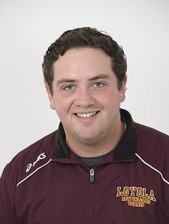 END_OF_DOCUMENT_TOKEN_TO_BE_REPLACED

Eduardo Garcia is currently in his second season as assistant coach with the Wolf Pack men's and women's tennis programs. He helped guide the two teams to record-breaking seasons in 2018, with the men setting a program-best for wins with 12 and the women earning their first ever spot in the NAIA top-25.

In December 2017, Garcia was named the men's and women's tennis assistant coach at Loyola University New Orleans, joining the staff after having played for the Wolf Pack tennis team from 2011 to 2015.

In September of 2017, Garcia was one of 24 mentees selected to the USTA Coach Mentoring Program which includes an invitation to the USTA High Performance Coaching Program, the opportunity to work and attend sectional camps and an open door to USTA Player Development and USTA National Camps. Prior to his position with Loyola, he had been coaching with the A's and Ace's program since 2015, where he received his certifications with USPTA and PTR.

During his time with the Wolf Pack, Garcia represented the men's tennis program as a member of the Student-Athlete Leadership Council.

Born here in New Orleans, he was raised in Managua, Nicaragua where he started playing tennis at a young age. From age 12 to 17, he was consistently ranked in the top four of his country.